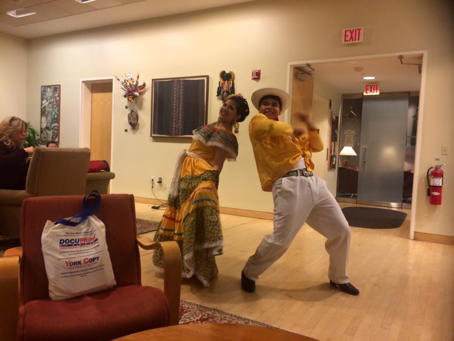 New Haven’s Latin-American immigrant community united in solidarity at the Latino and Iberian Film Festival at Yale, which kicked off last Wednesday.

Founded in 2015 by Senior Lector II of Spanish Margherita Tortora, the festival screens films from countries where Spanish or Portuguese is primarily spoken. This year, the festival featured more than a hundred films from countries like Venezuela, Brazil, Portugal, Cuba and Spain. Before starting LIFFY, Tortora established a similar festival called the New England Festival of Ibero American Cinema in 2010 which still continues to this day. After five years, Tortora decided she wanted to have a Yale festival.

“It’s even better that it’s just a Yale festival,” Tortora said. “Now, all the people at Yale feel like it pertains to us, as a community.”

This year, LIFFY has been particularly important in unifying the Latin American immigrant community during a divisive political moment. Tortora said that while she thought the festival would be a celebration of then-presidential nominee Hillary Clinton’s LAW ’73 election, she found it was instead a time of mutual support.

Tortora said that on Wednesday night, the Mexican film was a natural remedy to post-election distress. It provided a platform for audience members to talk about unity instead of division, and diversity instead of “fear of the other,” she said. She added that many of the festival-goers were immigrants impacted by the election’s results, as Donald Trump has vowed to deport up to 3 million illegal immigrants as president.

“I really think that’s one of the main reasons [to organise this festival],” Tortora said. “If we get to know each other, then we can’t fear each other, and you can’t hate. It’s harder to hate someone you know.”

The festival featured over 100 filmmakers, about 20 of whom were present. Isabel Rodas León and Gabriel Páez Hernandez had traveled from Ecuador to promote their film “Vengo Volviendo,” which was made during a six-month artistic residency for young artists from Azuay, a province of Ecuador. During their residency, Rodas and Páez organized production workshops in skills ranging from sound design to cinematography, which the participants put to use in the film’s production.

Rodas and Páez said that they are committed to the production and distribution of alternative cinema, independently made and promoted by themselves. Prior to LIFFY, they had toured the United States, screening their film to audiences of Ecuadorian immigrants.

“We like to see ourselves as entrepreneurs,” Rodas said. “This is our product. It has to be seen. We wanted to make it sustainable.”

In her film, Loayza sought to showcase the radio program, which aims to promote the Kichwa language. The radio program features Kichwa news, music and guest interviews.

“[Radio El Tambo Stereo] is always opening the doors for the community,” Loayza said. “Not just Kichwa speakers, but indigenous people … The important thing is that because of the radio program, there are more people wearing their traditional clothing and speaking Kichwa. They’re showing who they are, and sharing openly.”

Luna Beller-Tadiar ’18, who attended the festival, said that she was very happy to see such an extensive event focusing on Latin-American culture. Beller-Tadiar said that the film medium exposes audience members to other cultures and perspectives outside what they may experience in the U.S.

Beller-Tadiar said that such a global outlook is missing from conventional Yale discourse. She noted a recent encounter with a former Directed Studies student at a French language table as one such example. She said that the student scoffed when she described her Latin-America cinema class as an intense pursuit of difficult questions surrounding the intersection of art and politics.

“In the absolute ignorance and arrogance of that laughter it was apparent that he could not imagine that the study of cinema or Latin America was serious, or intellectually rigorous,” Beller-Tadiar said. “Does he not think studying narrative sequence in Shakespeare is worthwhile but analyzing shot sequence in Alea is silly? That Kant’s ‘Critique of Pure Reason’ is serious but Glauber Rocha’s ‘Aesthetic of Hunger’ of ‘Aesthetic of Dream’ are frivolous?”

Nadia Baldevas ’20, who attended the festival on Friday, agreed with Beller-Tadiar on the festival’s importance especially after the presidential race. She said the festival allows voices of different cultural groups to be heard, and is a reminder that “they are here and are not going anywhere.”

The festival’s closing ceremony will be held this Friday.